The best note-taking apps for Android

Note-takers, take note: Whether you want gobs of features or uber-simplicity, these are the best apps for collecting and managing info on Android. 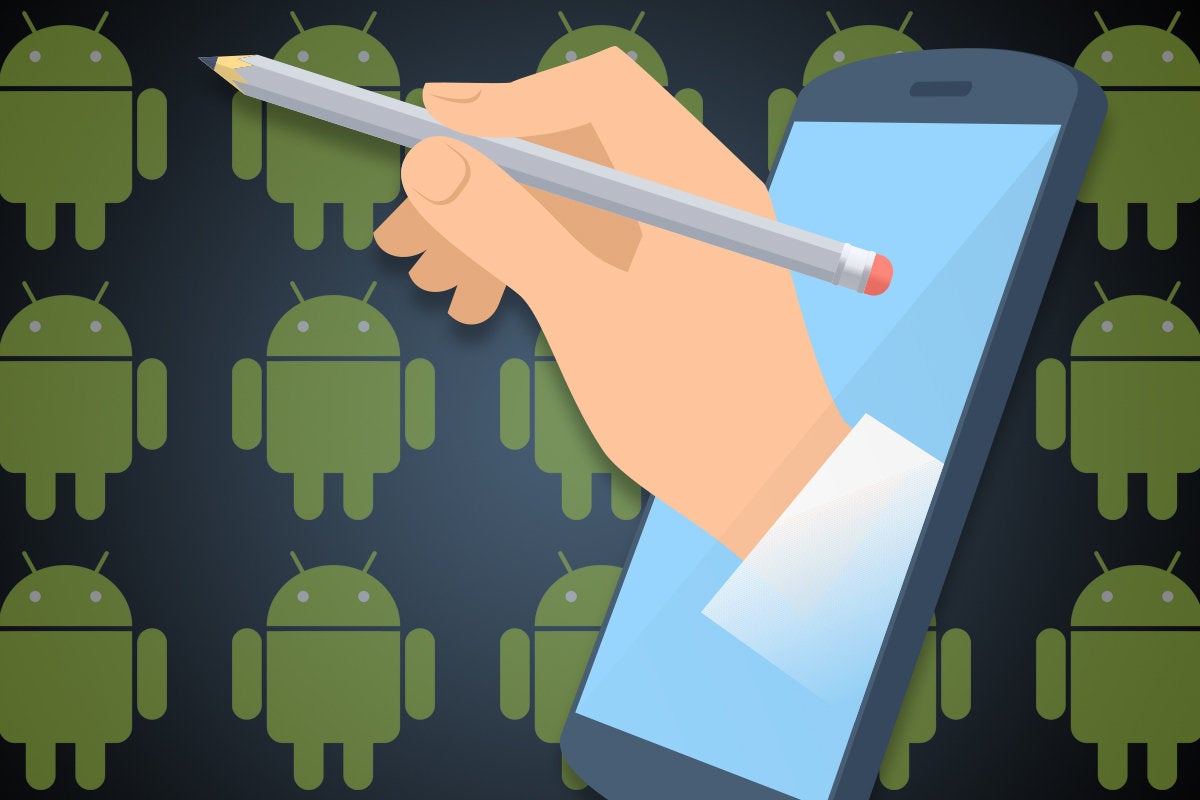 Taking notes is serious business, and having the right note-taking app for your Android device can make a world of difference in your ability to stay organized. That’s because a good note-taking app doesn’t just help you take notes; it also makes it easy to find what you’ve saved later, regardless of where you are or what type of device you’re using at that point.

But figuring out which note-taking app makes the most sense for you isn’t always easy. The Google Play Store has an endless array of similar-seeming options, and what’s ideal for one person may not be optimal for another.

I’ve spent a lot of time exploring the most prominent contenders for note-taking on Android, and I’ve identified the apps that rise to the top in three core categories: a “best for most people” tier, with a happy-medium balance of features and usability; a “best fully featured” division, with a focus on apps that provide a more robust set of functions for those who need it; and a “best no-frills” class that offers a recommendation for those seeking the utmost in simplicity. I’m also including a bonus category to highlight a relatively new up-and-coming app that isn’t quite fleshed out enough yet to earn a full recommendation but that’s worth checking out and keeping on your radar.

Here, section by section, are the best note-taking apps for Android.

The best Android note-taking app for most peopleGoogle Keep (free)

Google’s note-taking app has come a long way since its awkward 2013 debut. These days, Keep is a well-rounded yet exceptionally intuitive offering with many compelling elements, particularly for anyone invested in the Google ecosystem (as many Android users tend to be).

Simplicity is a key part of Keep’s appeal — because the reality is that most folks don’t need a complex, multilayered note-taking tool with oodles of superfluous features. Most of us just want a simple and effective place to jot down thoughts, ideas, and lists in a way that’ll make them effortless to access at a moment’s notice.

And that’s precisely where Keep excels: Open the app and tap the circular plus icon in its lower-right corner — or set up Keep’s excellent Android widget on your home screen (by long-pressing any blank area of your home screen and selecting the “Widgets” option that appears) — and you’re off to the races. You can type using your onscreen keyboard, write using your finger or a stylus, speak (and then save both an audio file and a plain-text transcription of your ramblings), or snap a photo of a document or anything else and let Google pull the text out of the picture for you.

Keep’s main screen is a delightfully manageable collection of your most recent notes. Changing a note’s position is as easy as dragging and dropping it or tapping a pin icon to ensure it stays at the top. You can color-code notes, if you want, and give them labels for subject-specific browsing. And, of course, you can use the search box at the top to quickly find notes by keywords — both those included in your own text and those visible in any attached documents or images. 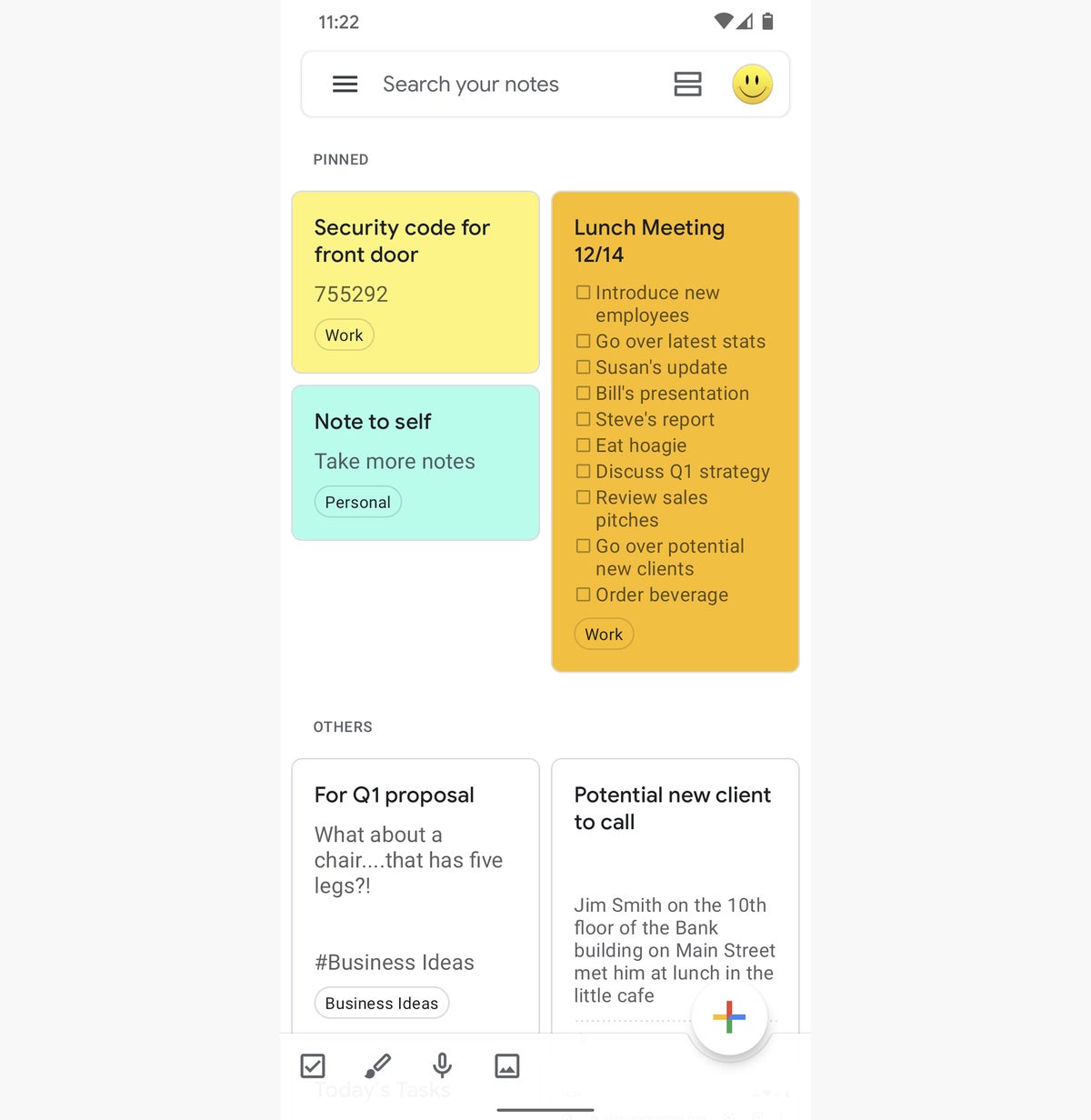 Google Keep is easy to manage — and easy on the eyes.

Everything within Keep syncs automatically, without any configuration or manual action required. And you can get to your notes from pretty much anywhere, since Google provides near-identical interfaces for Keep on iOS and on the web.

As far as ecosystem, Keep integrates intelligently with Google’s cross-platform reminder system — which means you can create a reminder on any device and then have it pop up on your phone at a specific date and time or even when you venture into a particular geographical location. 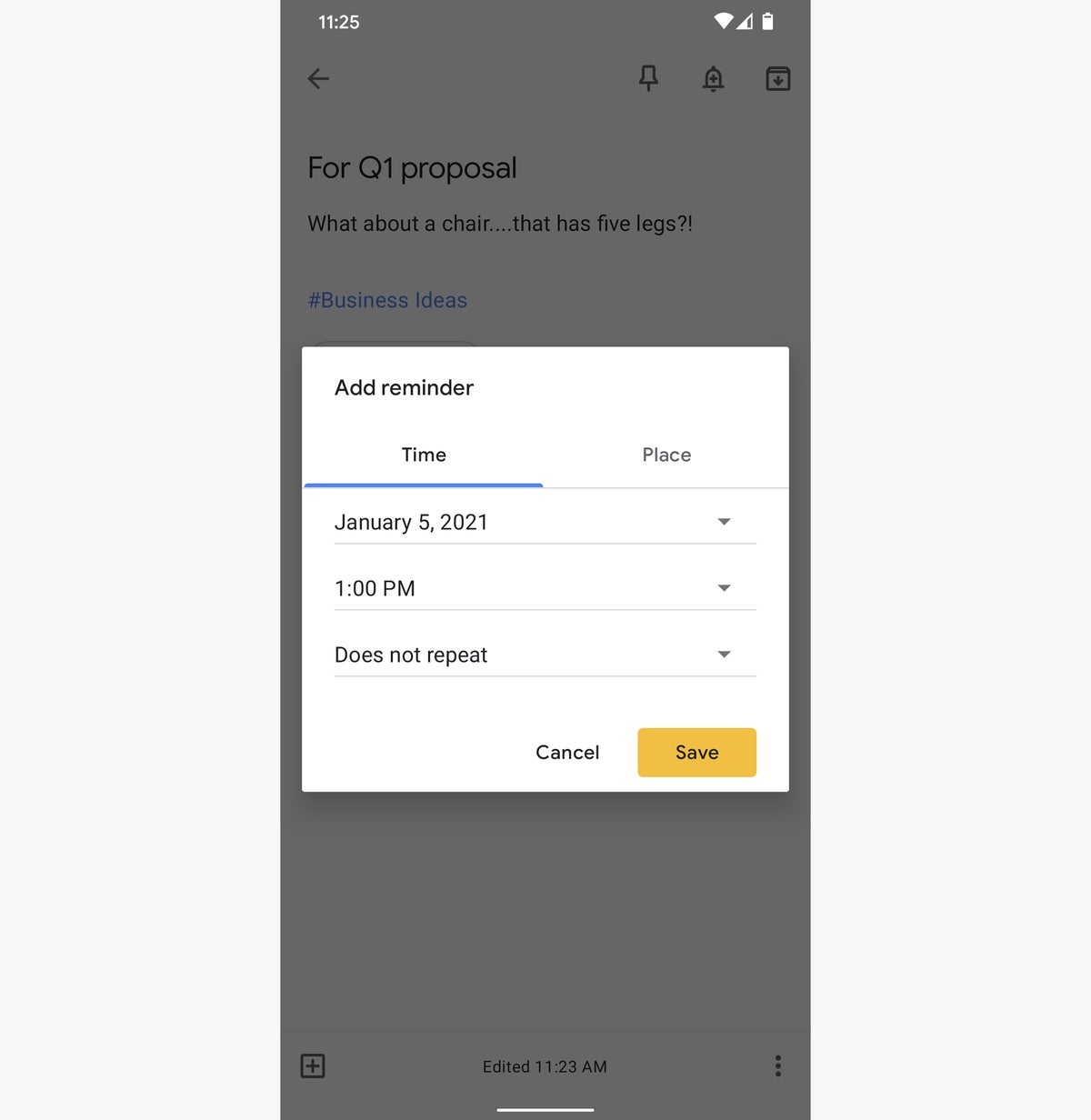 Keep’s time- and location-based reminders make sure you never forget an important note.

And Keep works hand in hand with Google Docs as well: With a couple quick taps, you can send any note from Keep to Docs for more involved editing. The Docs website, meanwhile, lets you pull up your notes in its sidebar and send content in either direction.

Factor in Keep’s multiuser collaboration feature, which lets you share notes with others so they can edit them, and this simple-seeming app is actually chock-full of functionality. It may not have all the bells and whistles other products offer, but as long as it has everything you actually need in a note-taking app, its lack of clutter and complication can be a critical productivity feature.

For some people, a note-taking app is more than just a searchable virtual notepad; it’s a finely organized system with mountains of features and intricate options. Well, if you’re someone who needs a little extra oomph in your note-taking hub, Microsoft OneNote is the Android note-taking app for you.

OneNote does almost everything Keep can do and then some. In addition to the above-mentioned basics, the app features a notebook-based system for categorizing and organizing your memos. It lets you easily export any note as a PDF or plain text file so you can share it with someone else without requiring them to sign into the service. And it makes it easy to add both emails and web pages into your notebooks via a unique address for forwarding messages and a desktop-based browser Web Clipper extension for capturing content on your computer.

Speaking of content, in addition to providing an account-wide search function, OneNote allows you to search within individual notes as you’re editing them. And unlike Keep, it has a bevy of advanced text-formatting tools for making your notes look any way your structure-loving heart desires. You can even combine regular typed-in text with finger- or stylus-made writing and markups in practically any arrangement imaginable. 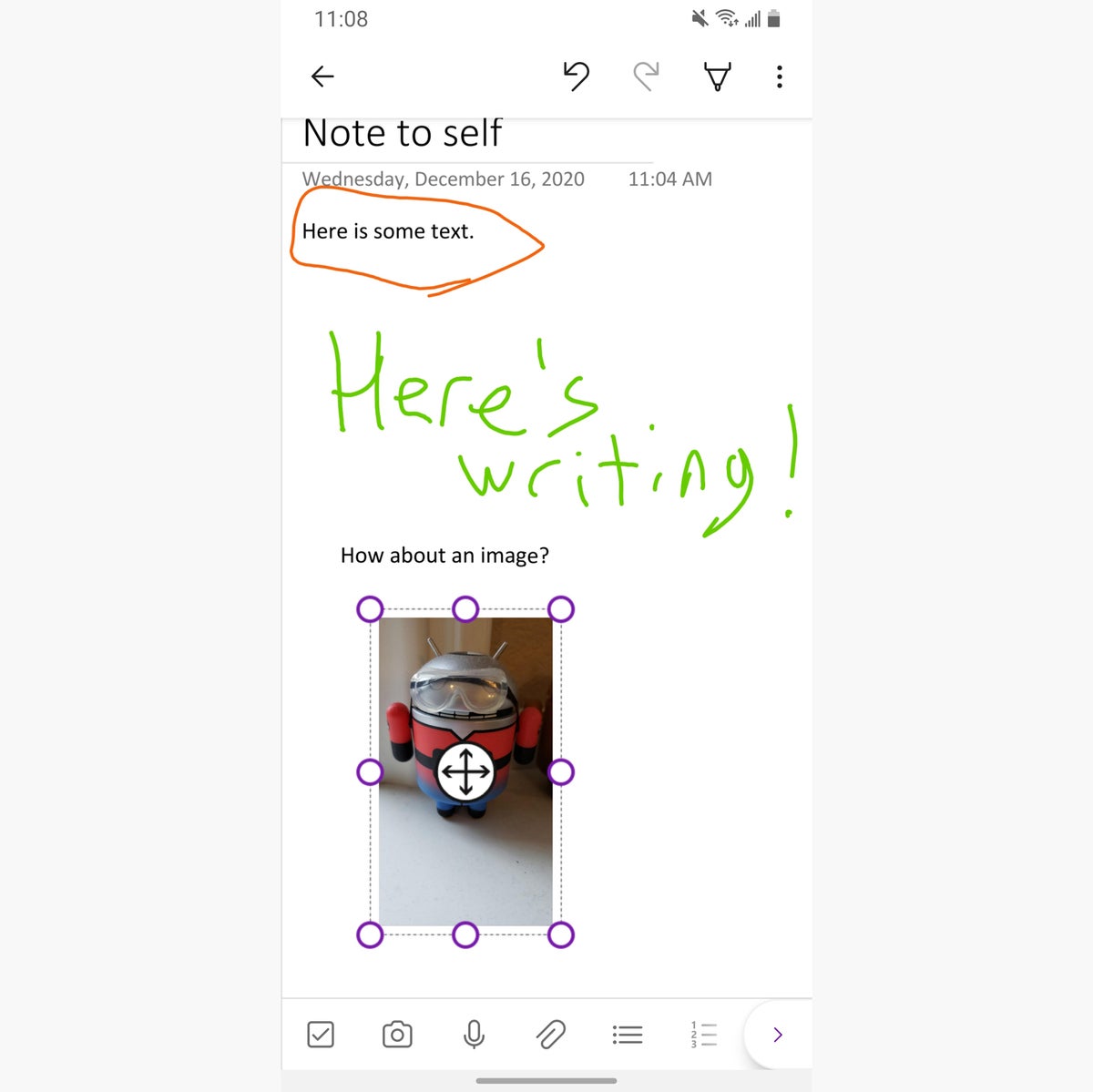 OneNote uses an unusual “canvas” system that lets you add bits of text and other visual elements into a note and then move them all around in any way you like.

If you want to switch to something simpler, OneNote includes a separate Sticky Notes section that’s almost like a miniature, scaled-down version of Keep within the app. It allows you to make quick Post-It-like notes without any frills or complications and then later find them in that same section. 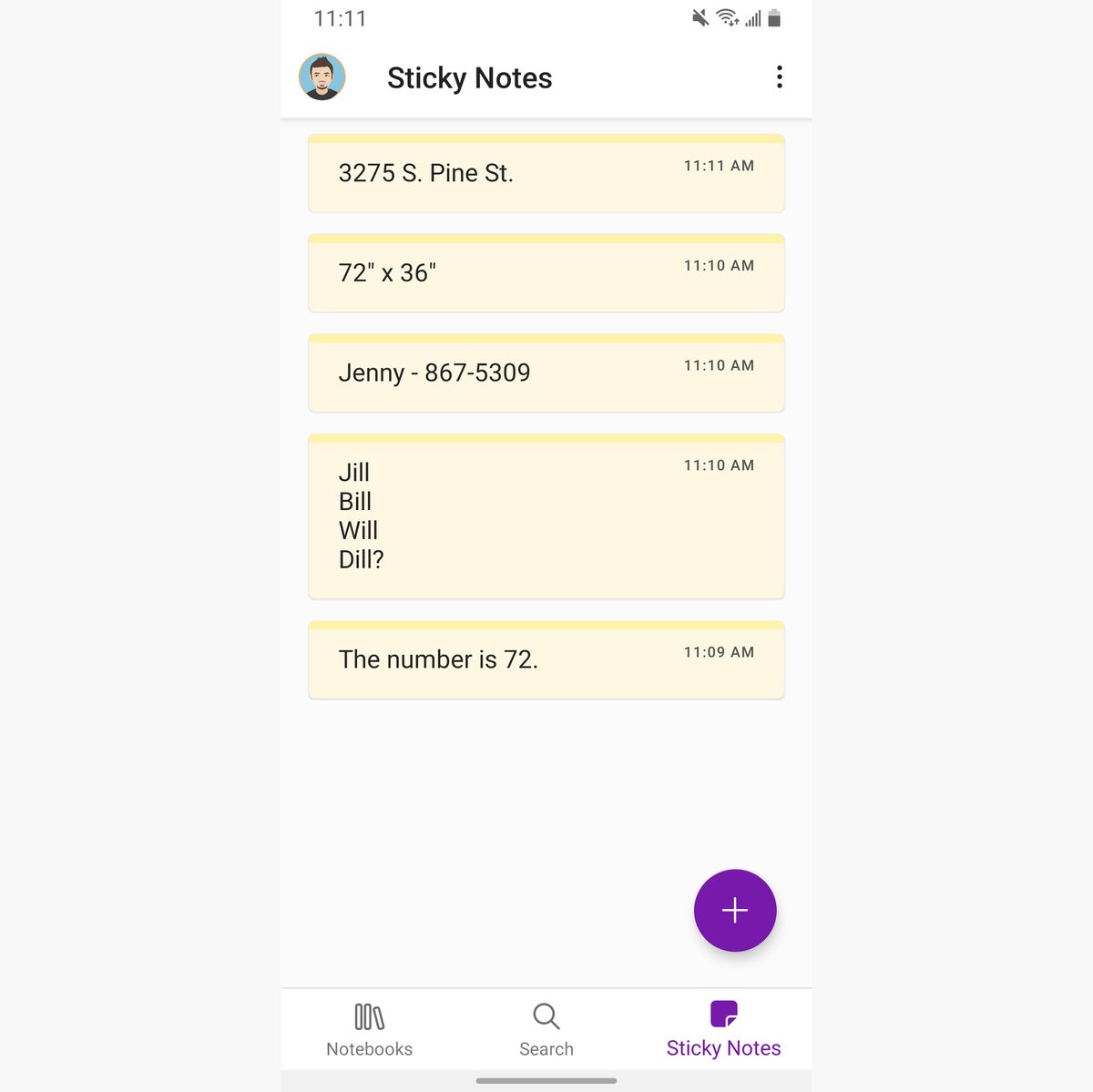 OneNote is fully capable of working offline, and everything you do in the app automatically syncs with OneNote on the web, on iOS, or in the dedicated Windows or Mac apps. And all of those apps, of course, integrate nicely with the rest of the Microsoft ecosystem — a major plus if you’re already invested in that universe.

For all of its positives, the OneNote Android app does have some noteworthy downsides. First, given the service’s complexity, it’s just not as intuitive as Keep. Navigating through the app’s layers of menus can get rather confusing, and its “canvas” system for formatting notes — which lets you place text and other elements in individual, moveable boxes all throughout the screen — can be a little overwhelming to wrap your head around.

The phone app, rather surprisingly, also lacks some basic-seeming elements — such as a built-in reminders system, support for searching handwritten notes, and perhaps most vexing of all, access to OneNote’s multiuser collaboration system and note-tagging system (both of which are available in OneNote’s other editions).

Still, if you can live with those compromises and want the extra bells and whistles Keep doesn’t provide, OneNote offers an exceptional set of features and a polished experience along with a level of ecosystem integration you won’t find in any other fully featured Android note-taking app. Most other serious contenders have even more compromises along with weaker ecosystems and a fair amount of clutter-creating and efficiency-reducing bloat — and they often come at a not-insignificant cost, too, compared to OneNote’s completely free nature.

The last official recommendation in our list is for anyone who wants a clean and minimalist space to take notes without any extras or unnecessary distractions. Simplenote lives up to its name and offers a refreshingly pared-down environment for writing and thought collection.

The app, made by Automattic, the same company behind WordPress, presents you with a sparse list of text-based notes and a blank page for editing them — no image or audio attaching, no formatting, no fuss whatsoever. 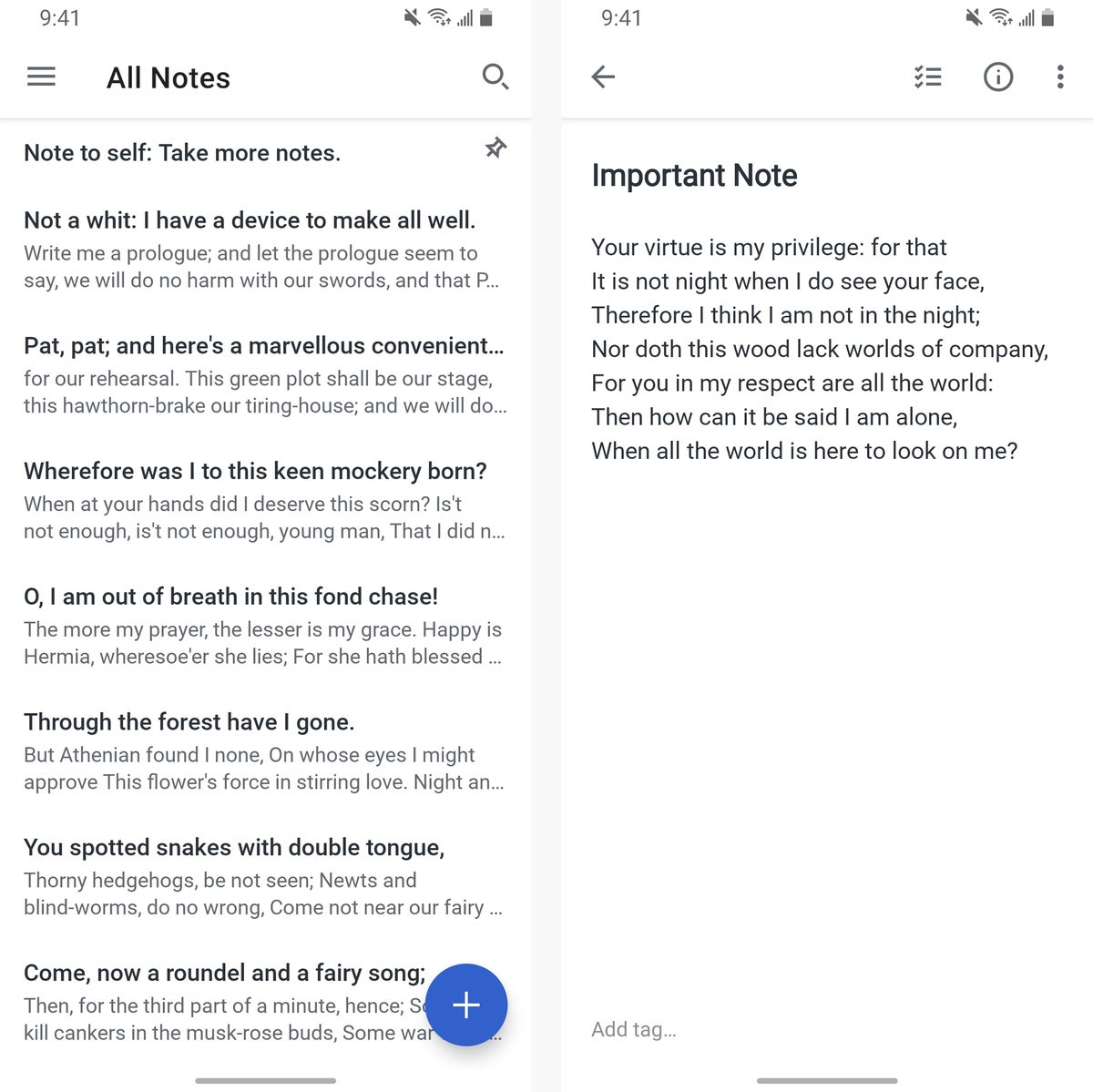 From viewing notes to editing, Simplenote is as simple as it gets.

Simplenote does have a handful of features beyond the absolute basics, including a simple system for tagging notes; an option for publishing notes to shareable URLs; and a slider for viewing a note’s history and restoring old versions. And the app keeps your data synced and accessible across multiple platforms and devices, with versions available for Windows, macOS, iOS, Linux, and the web.

Other than that, though, there’s really not much to say about Simplenote — and that, notably, is kinda the point.

An up-and-comer worth watchingBundled Notes (limited free version; $2 a month or $18 a year for a Pro-level plan)

This final app is packed with promise — but it isn’t quite far enough along in its development just yet to earn a formal spot in this list. It’s called Bundled Notes, and it’s a rapidly evolving, refreshingly different take on Android note-taking.

Bundled Notes is the effort of a single independent developer, and it’s consequently improving at a much faster pace than what you typically see with apps made by Google, Microsoft, and other tech titans. The best way to think of it is like Keep on steroids: The app emulates Keep’s default grid-like view and even brings to mind the Keep’s general interface, but it injects tons of potentially useful tools, options, and areas of customization into that basic framework.

Instead of just showing individual notes on its main screen, for instance, Bundled Notes displays bundles (get it?!) — which are basically like folders to keep your notes organized into thematic collections. Within each bundle, you then have a more traditional individual note view. 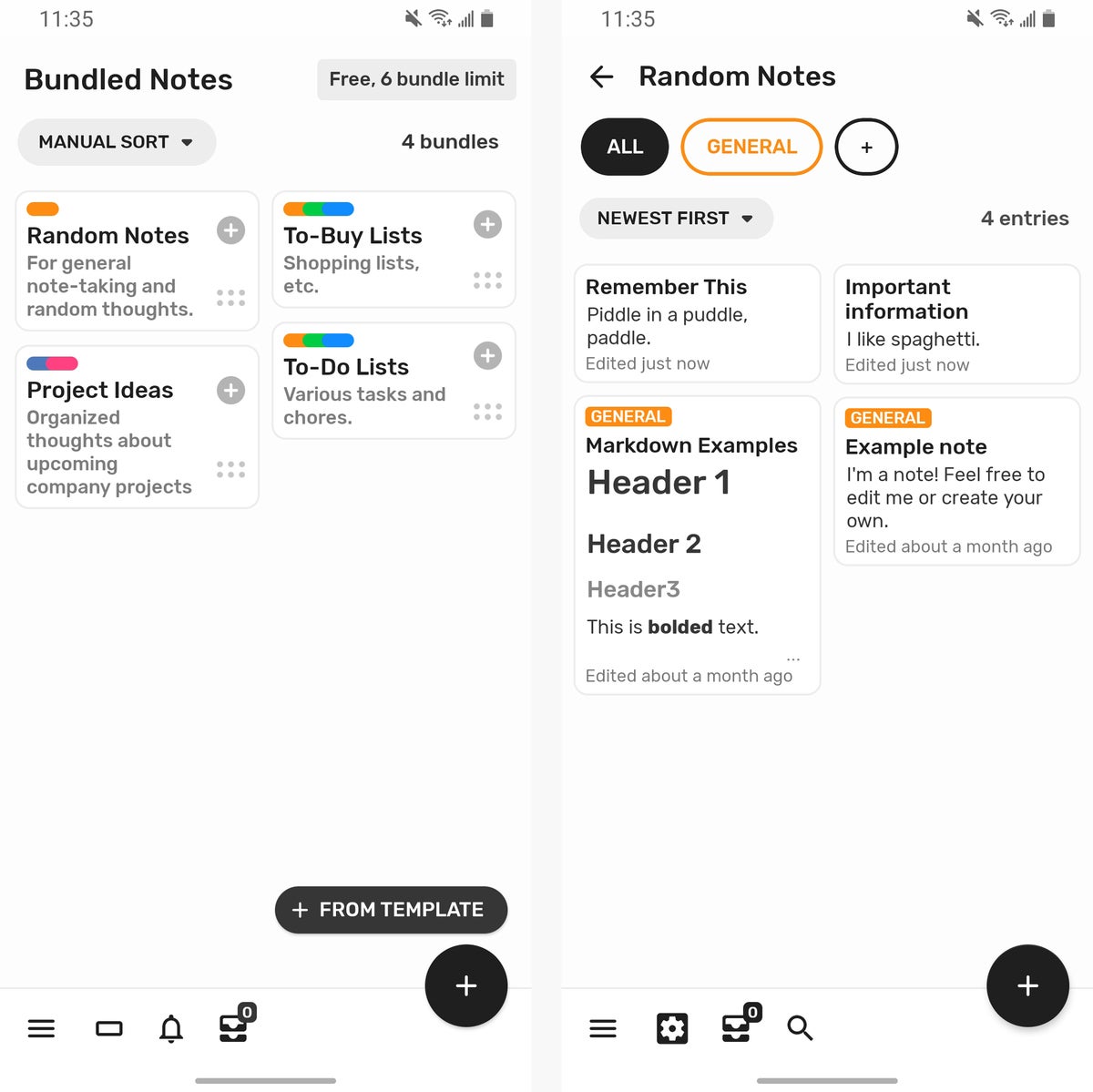 Bundled Notes organizes your notes into collection-like bundles that hold any number of individual items.

Within any note, you can format text, create lists that live alongside regular text, and attach any number of color-customizable tags. You can share any note as a plain-text or HTML document with a couple quick taps. And beyond that, you can create your own custom swipe gestures for performing actions on notes; you can pin a note to your notification panel for easy, ongoing access; and you can set super-customizable reminders for any note — controlling exactly how and when they appear and even how aggressively they alert you.

Bundled Notes has lots of other interesting features, including an optional Kanban-style system for organizing bundles into Trello-like boards of lists and oodles of other options for controlling how your notes are sorted and displayed.

Bundled Notes offers a web interface, too, which is accessible if you pay for the app’s Pro-level subscription. Doing so also removes a limit of six bundles and 300 notes and unlocks the ability to set recurring and persistent reminders.

Some areas of the app, however, still seem like a work in progress. Currently, for instance, the app lacks any way to attach images or files into a note, which seems like something that’s table stakes for any more fully featured note-taking app. It also doesn’t offer any form of collaboration within any of its interfaces. (Its developer says those features and others — including a level of end-to-end encryption most of the big-name note-takers still don’t provide — are in the works.)

For now, Bundled Notes is an impressive early effort that has the potential to blossom into a scrappy, nimble competitor to the mobile note-taking behemoths. It’s well worth checking out and keeping an eye on — so, y’know, be sure to make yourself a note to remember.

7 digital whiteboard solutions for iPad and[…]

Herewith, some unsolicited advice for Micro[…]