Google has introduced a Workspace tier for front-line jobs such as retail, hospitality, and healthcare workers. The company today also unveiled new features around time management and productivity-tracking for the core Workspace — formerly G Suite — software.

The Workspace Frontline edition includes all of the standard Workspace apps such as Gmail, Calendar, and Chat, as well as advanced endpoint management to secure employee mobile devices.

“We’ve also made it easier for business teams to build custom AppSheet apps directly from Google Sheets and Drive so that frontline workers can digitize and streamline their work, whether it’s collecting data in the field, reporting safety risks, or managing customer requests,” Javier Soltero, vice president and general manager of Google Workspace, said in a blog post.

The new tier will be available in all of the countries where Workspace is currently sold and is due to launch in early April.

Pricing for the new tier was not immediately available; a Google spokesperson promised Google Workspace Frontline edition pricing would be shared in “the coming weeks.” (Computerworld also asked for additional details on features of the Frontline Worker edition but did not immediately receive comment.)

Google already offers access to its app suite alongside features such as advanced endpoint management in its Business Plus tier ($18 per user each month), as well as Business Starter ($6 per month), and Business Standard ($12 month) with access to fewer features and certain restrictions on usage.

Front-line workers have typically been overlooked when it comes to getting access to digital tools. However, that lack of attention has been shifting as the importance of front-line roles has grown during the pandemic.

“With the growth in remote work during the pandemic, there’s been a recognition of how critical these roles are, and many businesses are now realizing they need to better connect these workers to the broader organisation — especially as their office workers are no longer in the corporate office,” said Angela Ashenden, a principal analyst at CCS Insight.

Google is not the first productivity software vendor to target tools toward use by front-line workers. Microsoft has two Microsoft 365 add-ons for this purpose; Microsoft 365 F1 and F3, which cost $2.25 and $8 per user each month, respectively. Microsoft has also developed numerous Teams features that are  aimed at deskless workers.

Similarly, Facebook announced an add-on for its Workplace app in 2019 that caters to these roles.

“We’re seeing IT organizations looking to take a more holistic approach to how they support their employees, wherever they are based, and there’s a scramble among tech providers to be the go-to solution for this group,” Ashenden said. “To a large extent, Google is playing catch up with this targeted offering, although it has had success with enabling this group of workers through its existing licences.

Ashenden added that while Google has yet to fill out the full details of the Frontline Worker edition, it’s likely to be a cut-down version of Workspace focusing on central communication features alongside Workspace security and management. 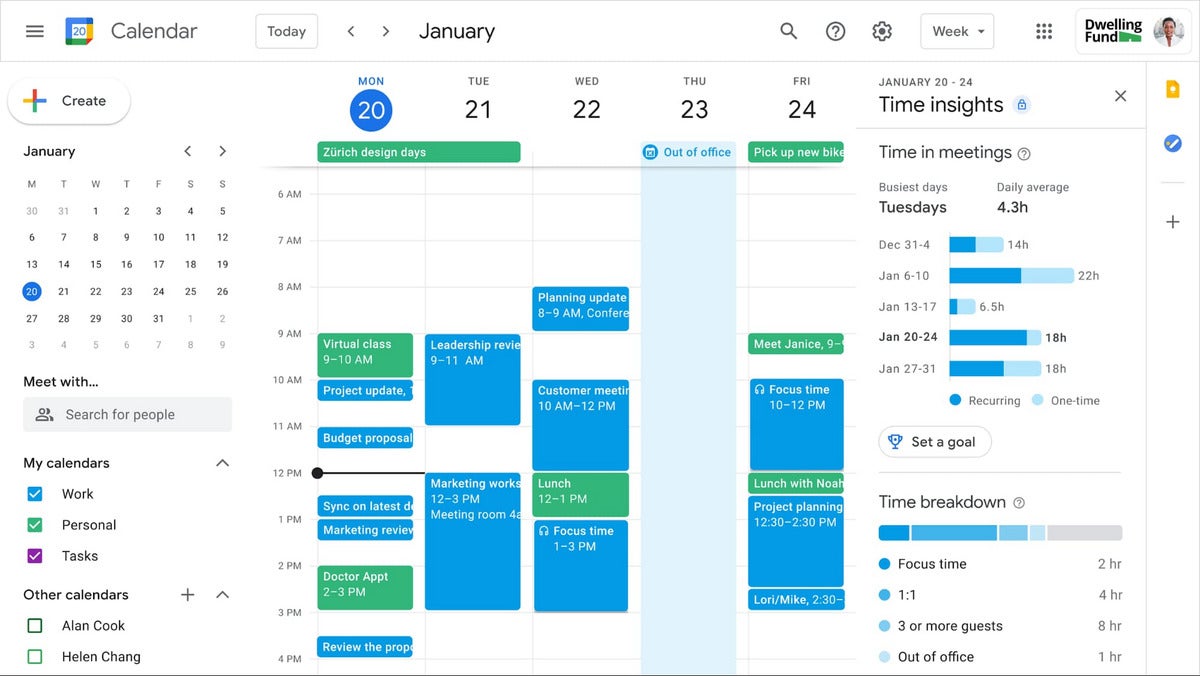 Worksapce now offers a “segmentable working hours” feature to let users designate when they are online and available for meetings.

Google also announced a new set of features for Workspace to help employees manage their working lives. This includes “segmentable working hours” to let users designate to colleagues when they are online and available for meetings; recurring out-of-office events; a “focus time” feature that limits notifications during certain periods; and location indicators that share the days an employee is working from home.

There’s also a “time insights” feature that offers workers metrics on how they are spending their time, such as hours spent on focus time, time in meetings, and out of the office. Google said the information is viewable by employees only, not their managers.