Microsoft’s Mesh aims for mixed-reality meetings of the future

At this week’s Ignite conference, the company unveiled the Azure-based developer SDK and offered a futuristic vision of remote collaboration.

As with all Mesh-based apps, it integrates with Azure Active Directory and Microsoft Account MSA identity services for user authentication, and information is encrypted.

The Mesh app for HoloLens 2 is available now in public preview.

In addition, Microsoft promises a Mesh-based version of AltspaceVR, the social VR platform acquired by the company in 2017. This will offer “enterprise-ready collaborative events” in full VR, such as meetings, town halls and other gatherings, while those without VR headsets can join on their laptop or PC in 2D-mode.

Microsoft is not the first to provide 3D virtual collaboration environments, with companies such as Spatial offering experiences similar to what can be done now with Mesh and HoloLens devices.

However, Microsoft could pave the way for wider use of virtual environments for collaboration, said Anshel Sag, an analyst at Moor Insights & Strategy, by building on early interest in the technology for connecting workers.

Microsoft said more apps are on the way, whether developed in-house — Teams and Dynamics365 are cited as candidates — or from third-party developers.

“Mesh is without a doubt a future-looking peek at meetings and remote collaboration, but as more of the leading tech companies embrace spatial computing, we will see an increased uptake of XR [extended reality] for work,” he said. 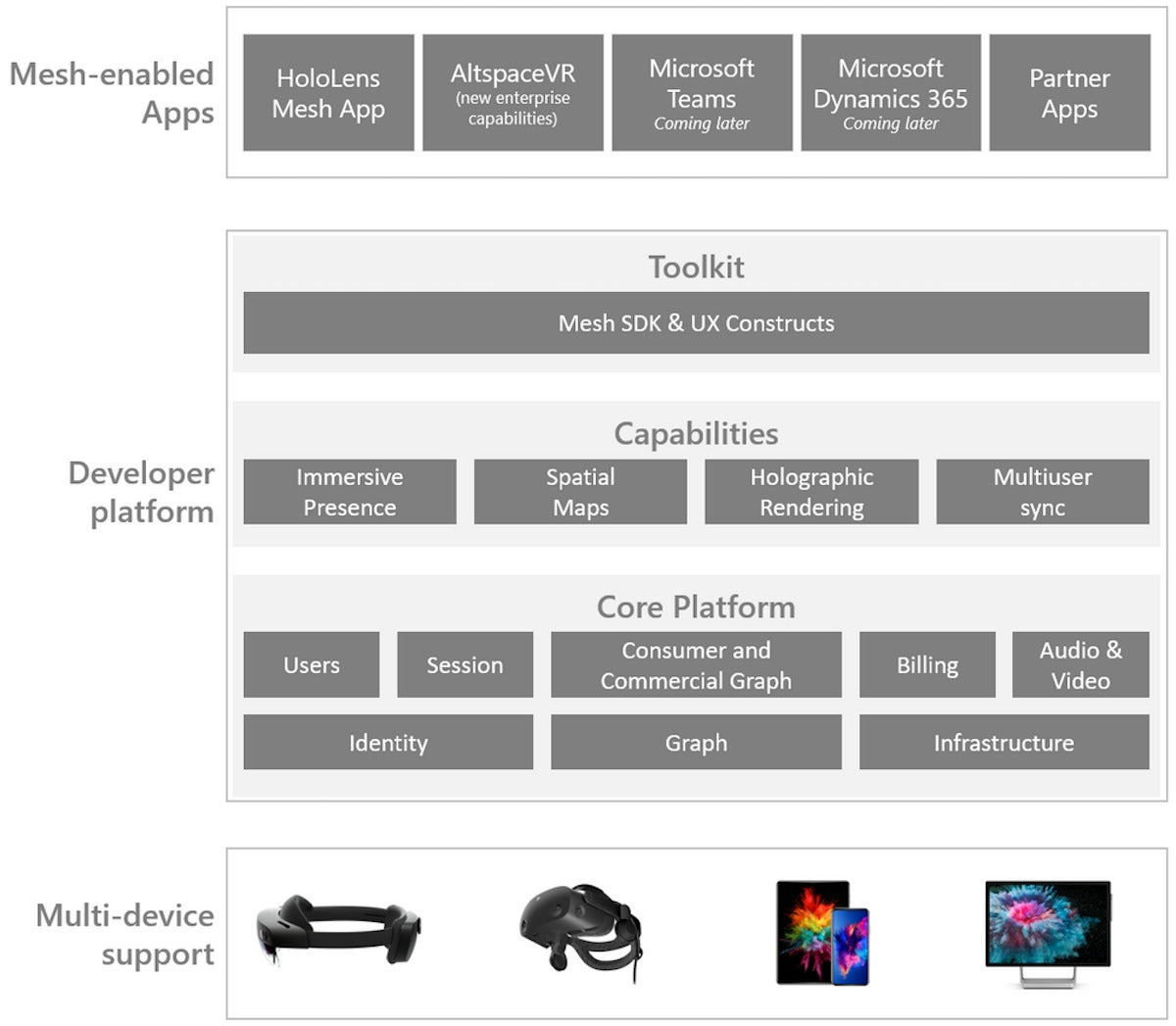 An overview of the Microsoft Mesh platform architecture.

Going forward, Sag sees the potential of other new ways of interacting with Microsoft’s portfolio of productivity products.

“Nobody wants to build a collaboration tool within their own apps from scratch and I would really like to see Microsoft leveraging Mesh inside of its own productivity apps as a way to show the best practices and implementations of the platform’s capabilities,” said Sag.

Such tools would need to improve on the 2D experiences currently available, he said. “For example, I would love to see someone presenting their slides in person in XR rather than just talking through them one by one and hitting the slide advance button,” he said.

“We know that Microsoft is starting with AltspaceVR, but I believe the potential is quite great when you consider the breadth of Microsoft.”

Of February’s patches, Ignite, and the fate[…]